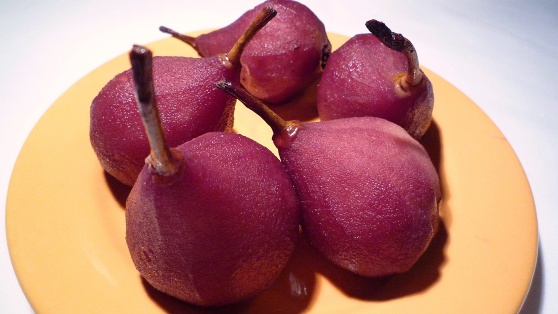 Poaching Pears (as many pears as your servings) 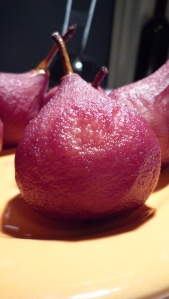 Put the wine in a pan, just enough so the pears are almost covered, add a splash of cassis and the cinnamon stick. (let’s say to take a ratio of about 75-25 for the wine-cassis)

Lay the pears on their side in the wine and bring to a boil. Let it simmer until a toothpick slides in the flesh easily. Do turn them a couple of times so they are red at all sides.

Take them out of the liquid and put them aside on a plate. Turn the heat up and reduce the liquid until you have a nice thick syrup left. Drizzle this syrup on the pear or the plate before serving.

put egg yolks (take 2 big egg yolks or 3 small ones for 6 servings) in an bowl and warm it au bain marie, during the warming you beat the eggs as good as you can. Yes this will give you strong arms, and it is not a bad idea to have an assistant waiting next to you to take over (usually people like to take over as they think they can do a better job, the mean thing here is that the second, or third person handling the mixing is bound to get results while the first one doesn’t just because it is further in the process, but the person taking over does think he is doing a better job).